This page contains information on the following topics:

Polymer morphology is the arrangement of the polymer molecules. There are two types of possible arrangements: Amorphous and Crystalline.

Importance of morphology to Injection Molding

Depending on the morphology, the setting of the process parameters including the tolerances can both change. For example, right mold temperatures are extremely critical to help achieve the required properties in the molded part. However, in case of amorphous materials although important for properties, they play a bigger role for the cosmetics. Tests have shown the ABS parts molded at 65 deg F still retain the required strength for certain properties. In case of crystalline materials, higher screw speeds are required to melt the crystallites with the help of the shear energy. In case of amorphous materials high screw speeds are not a must. Melt homogeneity can be obtained at lower screw speeds.

The Melt Transition Temperature – Tm
This exists for crystalline materials only. Below this temperature the polymers are soft and flexible and above this the polymer is molten. 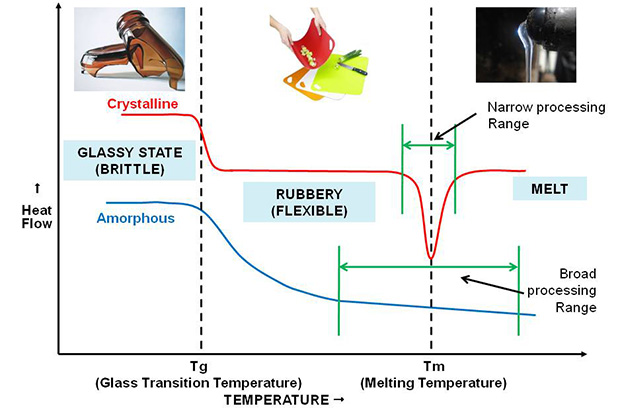 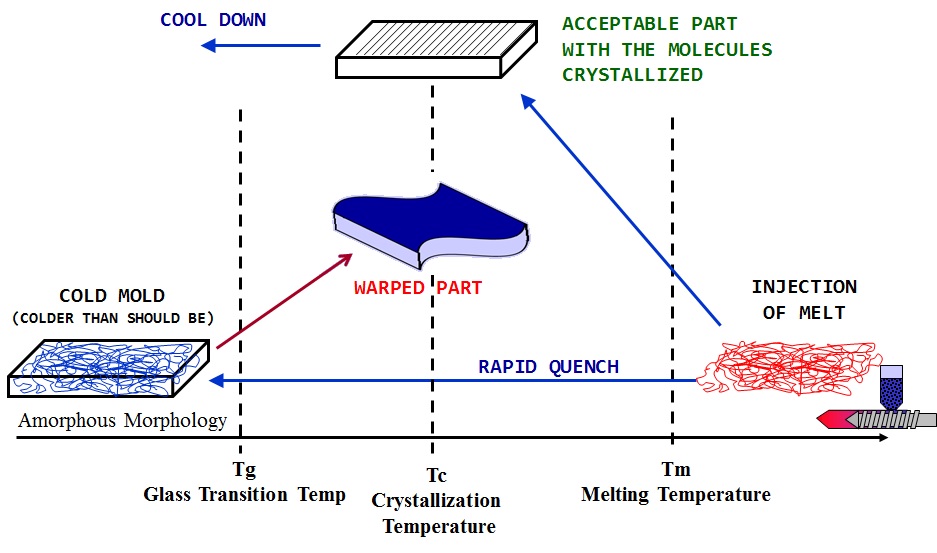 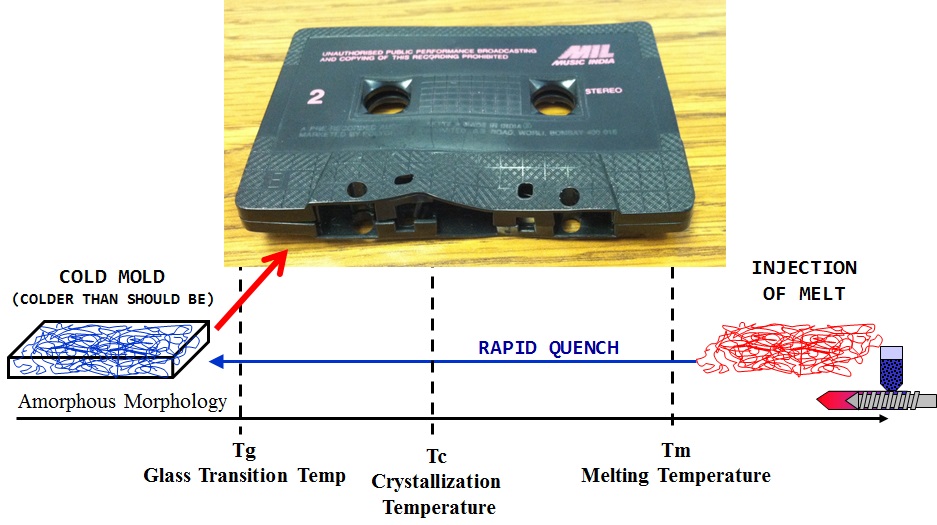 The study of the viscosity and flow of polymers is called Rheology.

When liquids are subjected to a force, the deformation is permanent. This property is called viscosity. Viscosity also is an indicator of the resistance to flow. Liquids are said to be viscous. When solids, example: metals, are subjected to a certain limited force the deformation is not permanent. When the force is released the solid recovers to its original shape. This property is called elasticity. The word ‘limited’ is used because excessive force causes permanent deformation, another topic of discussion. Plastics exhibit both a viscous component and an elastic component in their solid form and in their molten form. They are said to be viscoelastic and the behavior is called visoelasticity. This can be visualized with the spring and dash pot model.

A fluid whose viscosity is not influenced by the shear rate that is being applied to it. The viscosity remains constant as the shear changes. Shear rate in injection molding is synonymous to injection speed.

A fluid whose viscosity changes with the change in the shear rate that is being applied to it. The viscosity does not remain constant as the shear changes.

All plastics are a combination of non – Newtonian and Newtonian behavior. At lower shear rates, the plastic is non-Newtonian but as the shear rate increases, the plastic tends to exhibit a Newtonian behavior. This happens because with increasing shear rate, the polymer molecules start to untangle from each other and start to align themselves in the direction of flow. After a certain shear rate most of the molecules are aligned in the direction of the flow and increasing the injection speed does not further affect the viscosity.

To understand Scientific Molding it is important to understand certain properties. They are as follows:

Density of a material is the measure of the mass per unit volume and is generally expressed as grams per centimeter cube. Example: Density of General Purpose Polystyrene (GPPS) = 1.06 gms/cc.  All molding barrels have their shot sizes expressed in terms of GPPS. For example, when a shot size is specified as 100 gms, it means that it can hold 100 grams of GPPS. If the molding material changes to 30% glass filled Nylon (density = 1.35 gms/cc) then the same barrel will now hold 125.5 gms of Nylon and so the shot size is now 125.5 gms. 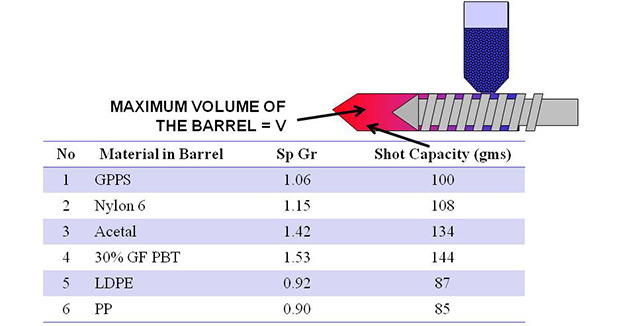 Shrinkage is the ratio of the volume of the plastic in the melt to the volume of the plastic in its final useable state. When applied to molding, it is expressed as the ratio of the dimension of the mold to the dimension of the part that is molded. Shrinkage is expressed in inches per inches or in percentage.

MFI and viscosity are inversely related: